An Old Fashioned Look at Our Town

Photo 1 – This postcard of the Bound Brook Post Office was printed in Germany and published by Fetterly & Lee.

Photo 2 – The Taylor family home on High and Hamilton was purchased by George Lamont and given as a home for the Public Library. In 1924, the building was raised and replaced by the current library which was erected a a memorial to WWI Service veterans.  It was dedicated on December 20, 1924.

Photo 3 – Sister May writes that she is having a fine time on July 4, 1906.This postcard written in French to “Chere Emily in New York City

Photo 4 and 5 – In a postcard dated September 8, 1905 to a Miss Elsie Walker in Webster, Massachusetts, Lizzie proudly shows off the Boat Club!

Photo 7 – The Washington School, (Bound Brook High School) completed in 1907 was home to high school and grammar school students. At the time, it was a state-of-the-art building.  Students commuted from as far
away as Belle Meade and Weston by train.

Photo 8 – This boulder was excavated from the bed of the Delaware and Raritan Canal during construction. – The Battle Monument was prepared and mounted by Essex Yawger, a local stone cutter.

Photo 9 – Until 1846, the Presbyterian Church was the only church in town.  By 1876, Catholics had congregations and places to worship.

Photo 11 – “The Road Leading to Martinsville, N.J” depicts a very rural lane to the mountains.

Photo 13 – The Van Horne House has stood gallantly on the hill since 1750. Few houses witnessed more of the Revolutionary War. Perhaps ghosts of the British, French and American Armies still trudge by silently paying respect to the Mansion on the Hill. 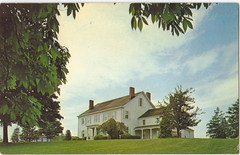 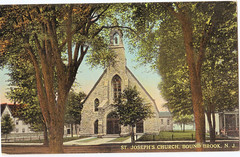 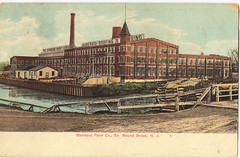 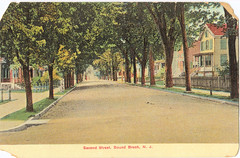 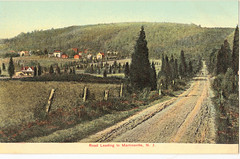 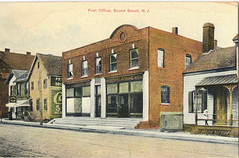