The area was first settled in 1681 and a community was established near the Bound Brook stream of the same name, which flows into the Raritan River from the Green Brook on the eastern side of the borough. The brook, which was mentioned as a boundary in a Native American deed, provides the source of the borough’s name.

A wooden bridge over the Raritan River was erected as early as 1761 and was named the Queen’s Bridge in 1767. Later, it became a covered bridge. During the American Revolutionary War, the bridge was used repeatedly by both sides during the Battle of Bound Brook in 1777.

The Battle of Bound Brook, one of the battles in the New York and New Jersey campaign during the American Revolutionary War, occurred on April 13, 1777, and resulted in a defeat for the Continental Army, who were routed by about 4,000 troops under British command.

The Place To Dwell

In 1909, the Bound Brook Board of Trade published  Bound Brook, The Place to Dwell.

Looking back you will see that much of Bound Brook has changed, but so much has remained the same.  We are a small town, we are close-knit, and we care.  From the long time business owner to the lifelong resident and all those in between, we have what many towns lack – community.  We are poised once again for great things.

On page seven of this book you will read,  ~ A wise man says, “He wants to live in a place that not only was alive one hundred years ago, but is alive and growing today.”  106 years later, we are still alive and growing.  We are still the place to dwell! 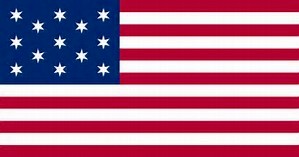 Where the Flag Was First Unfurled

The Betsy Ross Flag was first officially raised in 1777 by General Washington in the Camp of the Continental Army at Bound Brook.

Francis Hopkinson, Delegate to the Congress from New Jersey and a signer of the Declaration of Independence, deserves recognition for designing the American flag.

On June 14, 1777, the Continental Congress, meeting in Philadelphia, adopted the 13 Stars and Stripes flag as America’s colors, replacing the Grand Union flag existing since January 2,1775.

Betsy Ross, among other seamstresses, is credited with having sewn this flag based upon a design submitted to Congress by Francis Hopkinson, a delegate to the Congress from New Jersey, who possessed knowledge of heraldry.

The flag attributed to Hopkinson has thirteen stripes and thirteen stars in five rows of 3-2-3-2-3 on a blue field. While the flag resolution is silent on the star arrangement, some flags were made with five pointed stars, while others had six or more points.  The flag flown over Washington Camp Ground on Middlebrook Road has six pointed stars.

Because the Continental Army was encamped in the Middlebrook area on June 14 and several successive weeks in 1777, this flag is now flown at the Washington Camp Ground on Middlebrook Road, both day and night, by special permission of a formal resolution of the United States Congress.

Read more about this story here.

198 Main Street NR 6-22-84 SR 3-17-84 Constructed in 1913 by the Reading Railroad, this Flemish-bond brick structure has a brick balustrade and limestone trim. It was designed by William I. Houghton, architect of the Philadelphia and Reading railroad in the Classical Revival style with Colonial Revival influences. The platform canopies are hung from the building and attached to it by lionhead features. The waiting room has a terrazzo floor and quarried-tile wainscoting. The station is leased from NJ Transit by Mama Rosina’s Restaurant.

10 Hamilton Street NR 5-5-14 SR 2-27-14 The Brook Theater is the only surviving Vaudeville-era movie house in Somerset County. It was a critical part of the entertainment and social life for residents of Bound Brook and the surrounding rural area. The theater had an original seating capacity of 1,300 and could accommodate New York City productions. The marquee and blade signs and the front façade have been recently restored. The theater now utilizes a 1927 Wurlitzer pipe organ, which replaced the original destroyed by flooding. The theater is part of the Morecraft Building a small commercial development along Hamilton Street originally consisting of seven store fronts. It was constructed in 1927 by Alexander Morecraft, a local builder who also built the Bound Brook Memorial Library and the Bound Brook High School. The architect for the development was W. H. Lehman of Newark; the interior of the theater was designed by Vincent Marilette of New York. The theater is currently operated by the Somerset County Cultural Arts Center, Inc. For further information go to www.brookarts.org.

Railroad Avenue NR 6-27-08 SR 5-7-08 Possibly constructed as early as 1731, the Old Stone Arch Bridge may be the oldest bridge in New Jersey. The bridge formally carried the Raritan Road, an important colonial-era roadway, over the Bound Brook. It was the scene of a portion of the Battle of Bound Brook when, on April 13,1777, Hessian troops, under the command of Captain Johann Von Ewald, were “exposed to a murderous fire” from the half-moon battery located near the present roundabout in Bound Brook and had to lie down shielded by the bridge. In 1781, portions of Washington’s army used the bridge during the march to the Battle of Yorktown. The bridge has three arches and is 80 feet in length. The center arch has a span of over 17 feet. The bridge was widened in the late 19th century and sometime in the early 20th century the streambed under the bridge was filled. Since the main road had previously been moved to present-day Main Street, the bridge was buried. Plans are under way by Somerset County to improve the site and expose the bridge for public view.