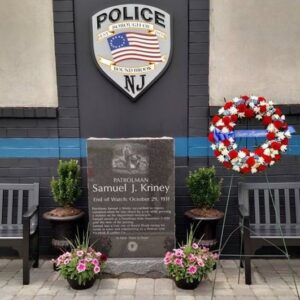 Description: Police Officer Kriney was injured in a motorcycle crash when he was struck by a vehicle as he attempted to stop a speeding motorist. Officer Kriney was transported to the hospital where he remained until his death three months later.

On July 29, 1931, Officer Samuel Kriney was pursuing a speeding motorist on Route 28 when he collided with the bumper of another motorist, who was turning into the Standard Oil service station on Union Avenue. Officer Kriney was thrown 18 feet to the sidewalk and his motorcycle caught fire. He survived the initial accident, suffering a fractured left leg, a fractured left wrist, a crushed left foot, and a cut artery, but never made it out of the hospital. Officer Kriney developed erysipelas, sank into a coma, and died on Oct. 29, 1931. The driver of the vehicle was charged with atrocious assault and battery and his license was temporarily revoked.